We sat down with the winners of Fatal Flaw’s very first Flash Fiction Contest to talk with them about their winning stories, their writing process, and what they love about flash. You can read "Honeytrap" and "Gorgon" in Vol 6: Fatal Flaw, available now!

"There are many stories, well-told, of young girls fast asleep. But in this one, the bite of an apple, barely chewed, lodges like a cork in her throat. They shake her and shake her, but no pressure builds, no bile bubbles to the surface. Her airpipe is more backed up than a bathroom sink. Now she waits in a glass coffin perched upon a mountain, her dark hair unspooled across a pillow, red lips parted, cheeks as pale as pearls. From so far away, she seems so pretty. As lovely as a flower."

Fatal Flaw: How did this piece come to be?

Michelle Champagne: Writing for me is much like taking a walk in an enchanted wood; I never know where I’m going or what I’ll run into. That sounds very magical of course, but so much of my own writing and where it originates is a mystery, even to me. The process of writing, for me, tends to be about discovery. I write towards the mystery in attempts to unravel it, to uncover what I’m trying to say, each word like a breadcrumb guiding the way.

For this piece, it began almost a year ago and everything was different, from the prompt that inspired it to the fairy tales in conversation. I so wished for it to work back then, perhaps too much, and ended up putting it away. It wasn’t ready yet. It needed to rest.

When I saw Cheryl Pappas tweet about the contest, my mind went straight to the piece and, upon rereading, suddenly had a better grasp of it. I went back to the writing and found myself, though very slowly, spinning flax into thread.

FF: What draws you to flash as a form?

MC: I love everything about flash. The economy of language. The importance and heft of every word. The emotional depths such a text can dive into within such a finite space. I find limitations exciting, for they invite both challenge and innovation. I always enjoy the surprise of a good flash, the gasp in its final lines. The best ones are those you read over and over, bewitched by the beauty.

FF: What was the last book, story, poem, or work of art that moved you?

MC: I think one of the great joys of being an editor at a literary magazine is how the writing you publish becomes so much of the writing that moves you. There’s a lot to be said, I think, about what’s going on at small journals and presses in particular.

In terms of more specific examples, I adore anything published by Fiction Collective 2, Dorothy, and Small Beer Press. And, as always, I look forward to the latest from Fairy Tale Review and Lady Churchill’s Rosebud Wristlet.

FF: Who is your ideal reader?

FF: Where is your favorite place to write?

MC: I live in an apartment, so the only feasible place for me to write is on my bed. There’s plenty of advice advising against this–the notion that a bed is a sacred space for sleep and sleep alone – but I find it quite delightful that the place where I write is also the place where I dream and vice versa.

FF: Do you have any strange writing habits?

MC: I enjoy listening to music when I write, which leads to a lot of physical movement when I’m drafting or editing. I pace around my room. I dance. (Rather poorly, I might add.) There’s just something about art that makes me so excited I feel compelled to move, as if the pulse of the work thrums through me.

FF: What is the best piece of writing advice you have received?

MC: My professor (and now dear friend) Dr. Gordon Johnston once told me I don’t need permission to write. It’s so simple, so true, and exactly what I needed and continue to need to hear.

Michelle Champagne is the Editor-in-Chief of Susurrus, A Literary Arts Magazine of the American South. She earned her Master’s in English at Wake Forest University, where she was the Graduate Fellow for Fiction Collective 2. Her work has been published in The Pinch, Ligeia, Sledgehammer Lit, and more.

"The apartment itself is too clean, too bright, like noontime sun reflecting off the waves, the sand too hot. She hates scotch, but he pours her one anyway. She swallows and squeezes her eyes tight and when she recovers she sees him watching her. She swallows again, pushes down the burning in her throat, stares back. She knows what she is to look at. Let him look."

FF: How did this piece come to be? ‍

Alex Bisker: I became fascinated with Medusa when I read about (a specific version of) her origin story, how Athena supposedly gave her the snakes and the stone stare as a punishment for getting raped in Athena’s temple. I wanted to explore the myth from the angle of the “punishment” actually being a blessing, a way for Athena to give agency back to Medusa after this horrible violence that was done to her. Originally, I had a roommate character who was going to shave the main character’s head, be an Athena stand-in of sorts. But after trying a few versions I realized the modern version of the story didn’t support or need that – it needed the woman herself to pick up the clippers.

FF: What draws you to flash as a form?

AB: I really enjoy the challenge of distilling a story down to its bite-sized essence.

FF: What was the last book, story, poem, or work of art that moved you?

AB: I recently devoured Kate McQuade’s short story collection Tell Me Who We Were. The haunting, lyrical voice of the stories is intoxicating, and I really love how they’re all interconnected without being too neat.

FF: Who is your ideal reader?

AB: I like writing for folks who are just as excited to read weird, fantastical fiction as the latest literary darling. Also, I tend to write in second person, so you have to be okay with that.

FF: Where is your favorite place to write?

AB: Sadly, my regular coffee shop writing spot closed during the pandemic. These days it’s mostly at my desk, fighting back some computer-loving orange cats.

FF: Do you have any strange writing habits?

AB: At any given time, I have between 10-20 Google Docs open that I bounce between. Sometimes they’re different stories, sometimes different versions of the same story. But I like context switching a lot and chasing after whatever idea is interesting at the moment.

FF: What is the best piece of writing advice you have received?

Originally from the midwest, Alex now lives in Brooklyn, NY. She spends her days helping improve government services as part of the growing civic tech community. In her spare time she writes short fiction, runs, and tries to get her two cats to take her seriously.

Abby Mills is a writer currently based in New York City. She’s drawn to writing that's both stinging and sweet, and is of the firm conviction that everything should be at least a little bit ludicrous. Writers that got her through the last year include Mary Oliver, Jenny Slate, and, as always, the Brontës. 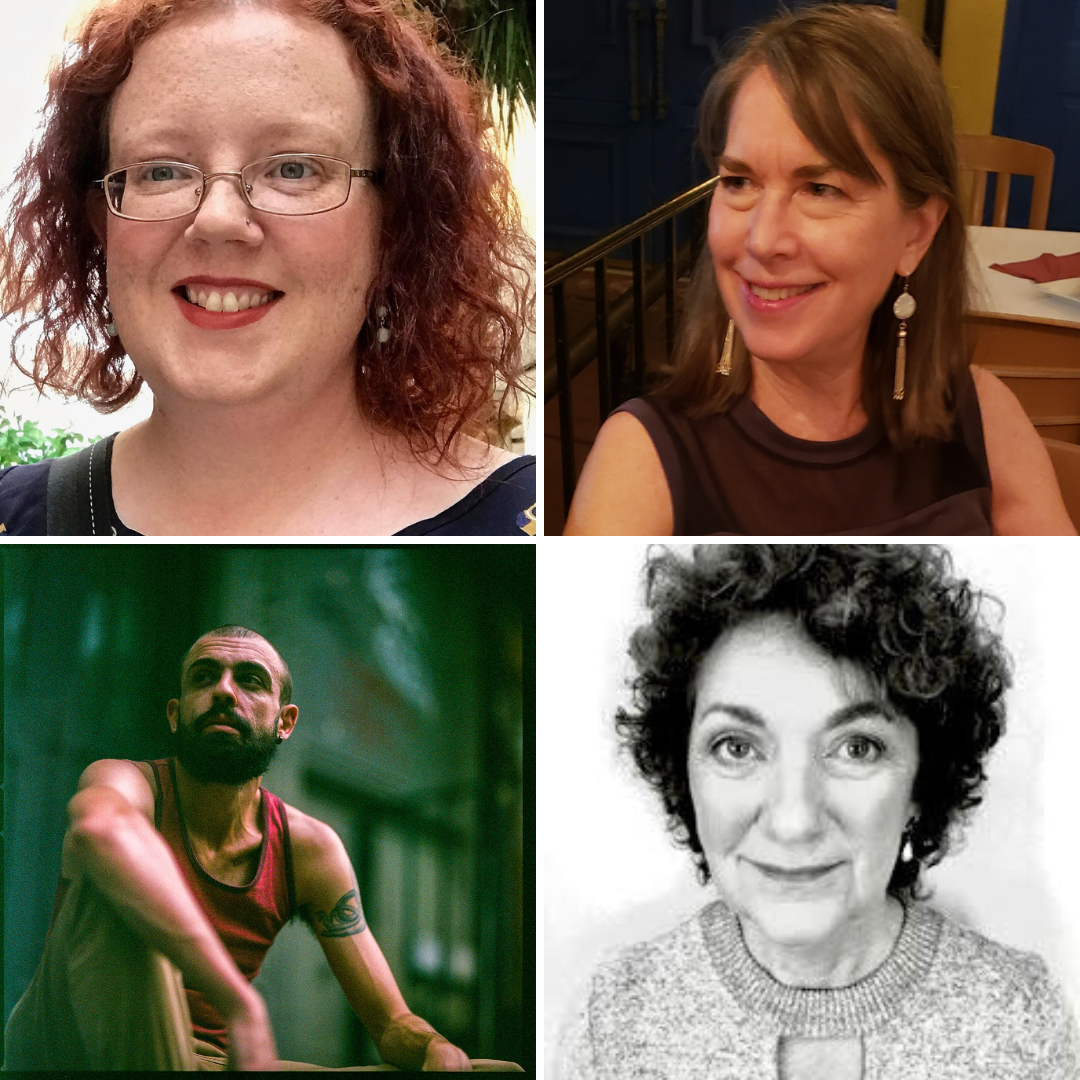 Artists on Artists: the Poets of Vol. 6

Learn more about poets Sarah Lilius, author of "Clean," Alex Wells Shapiro, author of "No Bins Are Coming," Patrice Boyers Claeys, author of "Asparagus," and Karen Paul Holmes, author of "Whoever Wrote, Rest Assured, A Peace Lilly is Not a Gift that will Become a Burden, Was Wrong." And make sure to check out their work in Vol. 6: Fatal Flaw!