BE PART OF THE FATAL FLAW COMMUNITY

Art-making is often a solitary endeavor, but we also know (from personal experience) that artists crave community. Fatal Flaw strives to offer that sense of community to our contributors and readers through our series of online and in-person readings, showcases, and other live events. Join us in connecting and collaborating with other writers, artists, and readers to foster art-making that can change the way we think about the world.

Take a look back at some of our past events and be sure to check out our upcoming ones! We can't wait to welcome you to our curious, oddball community.

Check back for news about upcoming events! 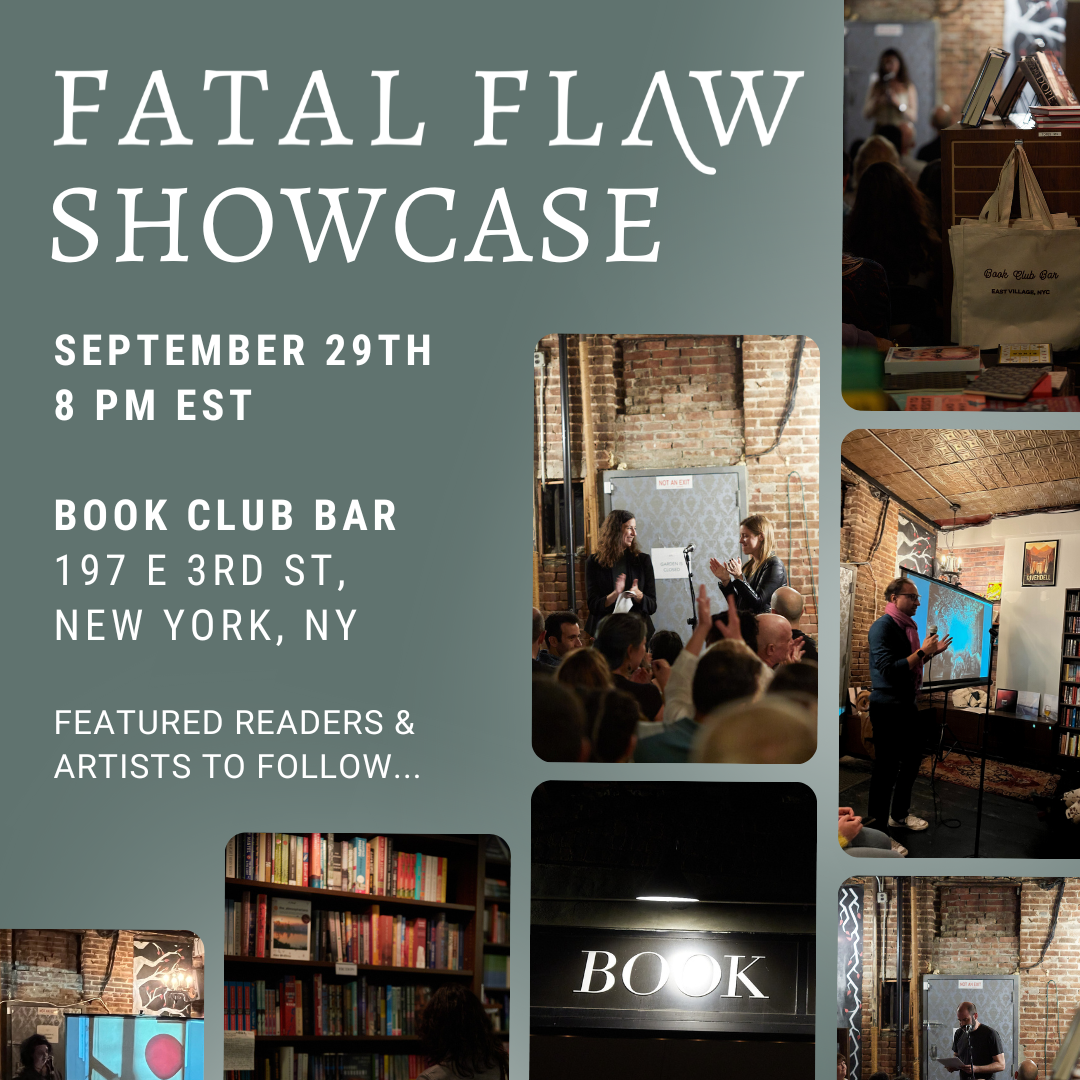 Thursday, September 29th
8-10pm ET
Book Club Bar | 197 E 3rd St, New York, NY 10009
Join us for this in-person event in NYC featuring a selection of Fatal Flaw’s published contributors reading their poetry, fiction, and nonfiction and showing their art. This memorable night at our favorite bookstore/bar Book Club Bar will span the weird, the wise, the wonderful, and everything in between.

Mia Arias Tsang is a writer and recent graduate of Yale University. Her work has appeared or is forthcoming in Half Mystic Press, Bullshit Lit, Fatal Flaw Magazine, Fifth Wheel Press, the Yale Daily News Magazine, and Broad Recognition, Yale’s feminist magazine. She lives in New York City with her cat, Peanut.

Karen Fitzgerald lives and works in New York City, in Western Queens. She is a mid-career artist, teacher, and curator. Born and raised on a dairy farm in the Midwest, it is this early, close relationship with the natural world that informs her work. Her work is actively exhibited in the United States, with 23 solo exhibitions to date. She received grants from the Queens Community Arts Fund, the Women’s Studio Workshop, and New York Foundation For the Arts.  Her work has been actively collected in both private and public collections. Heavily influenced by poetry, her work delights in the energy of gardens, mysteries and all things invisible.

Gianetti’s short fiction and creative work have appeared in Fatal Flaw's sixth issue, Hearth and Coffin, Crow Name, Collective Unrest, Hobart, and Cold Creek Review. He was the recipient of an Editor’s Choice Emblem for his short fiction from Hearth & Coffin Literary Journal. His debut novel, The Town of Jasper was released in 2017. He is currently at work on another short story and his second novel in the mystery/thriller genre.

Maria Ierusalimskaya is an international artist based in Brooklyn, NY. She graduated from the Academy of Fine Arts in Yerevan, Armenia in 2006 and moved to NYC shortly after. In her work, she shows objects that normally don’t catch people’s attention or don’t seem important on their own. She tries to give them importance by immortalizing them through her drawings. Maria is currently working on her “Rainbow” portrait series, a body of work that she started shortly after the beginning of the pandemic.

Maxim Matusevich is a professor of History at Seton Hall University, where he also directs the Russian and East European Studies Program. He has published extensively as a historian of Africa and the Cold War. Maxim also writes fiction—mostly in English, but occasionally in his native Russian. His short stories, novellas, and essays appeared in the Kenyon Review, New England Review, San Antonio Review, the Bare Life Review, BigCityLit, the Wild Word, WordCity Literary Journal, the museum of americana, Rivanna Review, Fatal Flaw Literary Magazine, and elsewhere.

Navila Nahid is a writer and published poet, currently residing in Brooklyn, NY. Her published works can be found in Humana Obscura, Sky Island Journal, High Shelf Press, Allegory Ridge, FreeVerse Revolution and The Dream Gods anthology. She also has a social media presence on Instagram as @seasalt.rose

Victoria Shelander is a queer writer and visual artist living in St. Paul, Minnesota. Her work draws inspiration from how we experience our senses and how those experiences interact with the human condition. Her background in neuroscience and psychology influences her unique perspective. When Victoria is not writing, she works to help others heal through creative expression.

Christiane Williams-Vigil is a Xicana writer from El Paso, Texas. Her work has been published in various literary magazines such as HyDRAW, Chismosa Press, and Marshall University’s Movable Project. Currently, she is a Best of the Net nominee and is a contributing staff writer for Alebrijes Review.